This sequel was prompted by a request from a Bloomfield Ass’t. Superintendent for a follow-up study to revisit this subject and search further for Best Practices that could explain more recent district success in improving school climate. CT Appleseed had previously leveraged the efforts of a team of pro bono attorneys to research and write “Keep Kids in School: Improving School Discipline”, our 2011 report that helped redirect school districts’ disciplinary policies toward retention and away from suspension and expulsion. Our team had interviewed school district administrators and teachers in nine diverse districts to learn which of them are handling their disciplinary challenges best – and how they manage that effort. We then issued our 2011 report “Keep_Kids_in_School Improving_School_Discipline”  to state legislators and education officials, as well as to school district board members and administrators statewide.

Connecting Through Literacy Incarcerated Parents, Children and their Caretakers (“CLICC”) 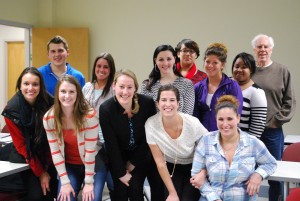 Connecticut Appleseed’s CLICC project made dramatic further progress in 2017, winning a 5-year, $660,000 grant to satisfy mentoring and literacy needs for incarcerated parents and their children throughout the state. CLICC aims to reduce recidivism and facilitate successful reentry outcomes by reconnecting incarcerated parents and their children by using a family literacy curriculum and providing supportive mentors. CLICC includes six months of in-prison mentoring and literacy work as well as six months of post-release mentoring, literacy work and family activities.

In 2017 we revived our successful “HELP” project to provide regular volunteer legal assistance at homeless shelters in both Hartford and New Haven. Starting in September 2017 we launched this revival at the South Park Inn in Hartford and Columbus House in New Haven. Attorneys volunteered for the revival’s initial 9 months from Murtha Cullina LLP, Day Pitney LLP, Wiggin and Dana LLP and the George Crawford Black Bar Association.

Through year-end 2014, Connecticut Appleseed had recruited attorneys to provide free weekly pro bono legal assistance for homeless individuals at two Hartford shelters – Mercy Shelter and the House of Bread. An average of 4 clients was served each week by the volunteer attorneys, each of whom was assisted by volunteer students from UCONN Law School. In the first 5 years of this project, nearly 200 Tuesday morning clinics provided assistance to well over 600 individuals. CT Appleseed ensured that volunteer lawyers were adequately trained and administered this program from late 2009 through 2014.

In 2018 CT Appleseed forged a new collaboration with volunteer attorneys from The Hartford’s Legal Department and the Governor’s Prevention Partnership toward a timely project researching Best Practices in public schools to prevent cyberbullying and social media abuse of children. The Governor’s Prevention Partnership is contributing a great deal to the project by both helping to train volunteer attorneys for the school district interviews and drafting the interview questions. We’ll issue a report this Fall, then circulate our findings throughout Connecticut public school systems.

In 2012 we completed a report “Bullying_in_CTs_Public_Schools” to accelerate compliance by school districts with Connecticut’s 2008 Anti-Bullying statute.  The “Best Practices” and related anti-bullying strategies that our report surfaced among 11 participating districts are assisting schools and districts statewide in accepting the increased responsibility for protecting children that were prescribed by the 2008 statute. Based on interviews with administrative officials and teachers that were conducted by a team of more than 20 pro bono attorneys from Travelers, was distributed to every school board member, administrator, principal, and legislator in the state.

Roughly 10 years ago, the national Appleseed organization documented and publicized disparities in remittance pricing and the damaging financial impact on immigrants. Pressure initiated by Appleseed has helped cut the processing fee typically charged on money sent to family and friends back home from 10% toward a 3% standard recently set by a United Nations-related working group.

In 2015, with financial support from the Ford Foundation, Connecticut Appleseed collaborated with sister Centers in Nebraska, Texas, Kansas and Washington State to survey immigrant remittance use. With cooperation from in-state community partners that serve immigrant populations in Stamford, Wallingford, and New Haven, we are contributing toward publication of an early 2016 report on the U.S. Consumer Financial Protection Bureau’s 2013 remittance rule implementation.

We spearheaded a 2010 collaboration of financial institutions, community partners, and state and federal banking regulators to connect unbanked and underbanked state residents with mainstream financial services – including affordable checking, savings, and credit opportunities.   Drawing on findings from our 2009 survey of Connecticut immigrants, Appleseed served as the catalyst for the formation of “Bank on Connecticut”, a statewide 2011 effort to better serve unbanked and underbanked residents. Nonprofit community organizations partnered with financial institutions in 5 discrete and localized pilot tests (in Stamford, Norwalk, Bridgeport, Derby and New Haven) to help individuals progress from financial education coursework toward establishing long-term banking relationships, asset-building and credit histories.

By combining work-based training at Optimus’ clinics with Norwalk Community College’s provision of academic coursework, the CTWP pioneers a revolution in cost-effective health care delivery while creating a new career track that enhances low-level, dead-end healthcare jobs and lifts incomes. If the CTWP’s newly-trained “health coaches” demonstrably improve self-management of diabetes and congestive heart failure patients at lower cost and moderate hospital readmissions, Connecticut Appleseed will leverage our Board member relationships with state officials to win reimbursement under Medicaid and state certification for “health coaches” by the CT Dept. of Public Health.

Five Optimus Medical Assistants successfully completed the pilot’s initial “health coach” course, taught by Norwalk Community College instructors, in the Spring of 2015. In October 2015 Dr. Alix Pose of Optimus and Dr. Susan Burger of UCONN’s School of Nursing began evaluating the benefits to twelve patients from this initial education/training phase. Appleseed’s planned 2016 replication of this pilot elsewhere in the state will turn on the evaluators’ findings.

We distributed more than 6,500 copies of our 5 handbooks that demystify complex education law issues for parents and began holding “Ask a Lawyer” parent forums across the state to discuss these issues. Our bilingual handbooks cover the following topics:

In 2009 we partnered with the National Association of Mental Illness-CT (NAMI-CT) to develop and distribute a 57-page guide entitled “Understanding the Criminal Justice System: A Guide for Adults with Mental Illness, Advocates and Families”, then printed 1,000 copies for NAMI-CT to distribute.

A PART OF THE APPLESEED NETWORK

www.appleseednetwork.org Appleseed, a non-partisan and non-profit organization, is a network of public interest law Centers working to identify and address injustices in their communities. Appleseed works to build a just society through education, legal advocacy, community activism and policy expertise, addressing root causes and producing practical solutions. As one of the nation's largest legal pro bono networks, Appleseed Centers work both independently and collectively, bringing their own experiences to create local solutions that are nationally relevant. We connect the top private practice lawyers, corporate counsel, law schools, civic leaders, and other professionals to tackle problems locally, at their root cause.